Emma Lee, "The Significance of a Dress"

Emma Lee’s most recent collection is The Significance of a Dress (Arachne Press, 2020). Previous publications include Ghosts in the Desert (IDP, UK 2015), Mimicking a Snowdrop (Thynks Press, 2014), Bitter Fame (You Write On, 2011) and Yellow Torchlight and the Blues (Original Plus, 2004). She co-edited Welcome to Leicester with Ambrose Musiyiwa (Dahlia Books, 2016) and Over Land Over Sea: Poems for Those Seeking Refuge with Kathleen Bell and Siobhan Logan (Five Leaves, 2015). Her essay “Spoken Word as a way of Dismantling Barriers and Creating Space for Healing” was included in Verbs that Move Mountains (Sabotage) and she presented a paper at the Jungle Factory Symposium organised by the Leicester Migration Network. Emma Lee reviews for The High Window Journal, The Journal, London Grip, Sabotage Reviews, was Reviews Editor for The Blue Nib and blogs at http://emmalee1.wordpress.com. She was the first person to win the Saboteur Award for Best Reviewer twice. 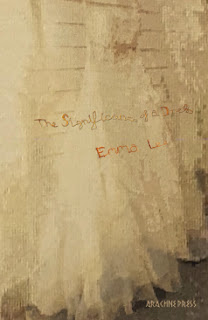 About The Significance of a Dress
These are poems informed by and immersed in politics. Whether investigating the lives of refugees, families or women in crisis, everything has a significance beyond the surface. Here are beautiful, hair-raising words and form, utterly from the heart.

You can read more about The Significance of a Dress on the publisher's website here.

Below, you can read two sample poems from the collection.

Even if home is makeshift and her carriage is a borrowed
pair of shoes that dance over gravel baked in the desert heat,
a bride still wants to feel special, at least for one day.
No one can afford to buy when twenty neighbours share
a latrine and there's a constant vigil against disease.
Tulin, named after a daughter, offers gown hire, make-up
and hairstyling that will withstand humid evenings.
"I don't ask how old they are," says the beautician. A mural
outside shows a girl in a white gown holding a teddy bear.
The future is tomorrow. Next year is a question.
A wedding is a party, a welcome, a sign of hope.
The dresses sparkle with sun-reflected diamante
but the gravel paths of the camp leave the hems stained.
I saw life jackets left on the beach

I asked the waiter, but he shrugged.
Later he loaded crates into the manager’s car.
She looked dead on her feet, said something
about an extra sitting at dinner.
But there weren’t any new guests.
It was my two weeks in the sun.
I’d eaten nothing but lettuce
for weeks to look OK in my bikini.
The waiter stopped flirting, went quiet.
I followed him to the derelict hotel where tents
had sprung up like mushrooms overnight.
He didn’t want to talk. I didn’t push it.
You learn that at a call centre. Some people
think you’re a machine and they just poke buttons.
Others, you’re the only person they’ve talked to all day.
I’d only come to sunbathe
so helping give out food didn’t seem much.

One mother told me men drifted around
and she didn’t think her daughters were safe.
After their journey, they didn’t want confinement
to a crowded room. I became a chaperone.
I taught them hopscotch on the beach.
Their laughter such a strange sound.
Paperwork’s slow at the best of times.
I left my euros for the hotel to pass on.
I hope it helped. I bought them sanitary pads.
People don’t think about that:
their bodies capable of creating life.

Posted by Creative Writing at Leicester at 12:03