Charlotte Barnes, "All I See Is You" 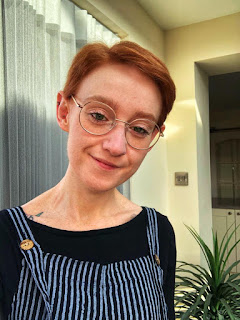 Charley has published a number of poetry works, most recently her debut full collection, Lore: Flowers, Folklore, and Footnotes (Black Pear Press, 2021). Alongside this, she writes crime fiction under Charlotte Barnes. Charley is predominantly interested in representation of (violent) women in contemporary crime, and this is reflected heavily in her fiction.

Her most recent publication, All I See Is You, was published by Bloodhound Books in May 2021. Charley’s next novel, forthcoming with Bloodhound Books, is due for release in August 2021. 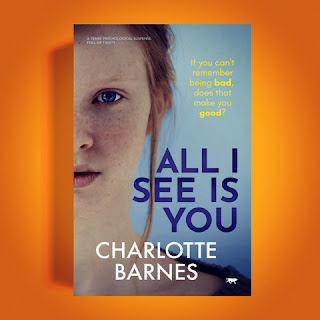 About All I See Is You, by Charlotte Barnes

All I See Is You is a psychological thriller narrated by M.

Hinged on memory lapses, misplaced characters and suspected murder, the novel follows M as she tries to locate memories that have been misplaced through childhood and into adulthood.

While M is working with a counsellor to try to recall these missing experiences, she is also trying to nurture a new romantic relationship with Caleb who lives across the street from her.

The book is an intricate narrative packed with twists and unreliability, making it the perfect read for fans of a narrator you can’t trust.

Below, you can read an excerpt from the novel.

From All I See Is You

It seems strange to confess to something that you don’t know for certain you’ve done.

At heart, I’m an honest person. One of my earliest memories is of finding a man’s wallet on the pavement, not fifty yards up the road from our house. I picked it up and, without looking inside it, I took it home to my father. He glanced inside and made a show of checking the cards. But, when he thought I wasn’t looking, he took a slim fold of notes from the back of the wallet and stashed them into his trouser pocket.

‘Kid?’ He raised his eyebrow. At the age of nine, this felt like a challenge.

‘Nothing,’ I said, then went back to my business of identifying flowers along the roadside, which probably felt more important to me at the time anyway.

At heart, I’m an honest person, yas. But I’ve never been especially big on confrontation. One of the reasons this is one of my earliest memories is that my parents spent the majority of my formative years arguing with each other – not over me, I hasten to add. I was never a troublesome child – at least, not that they were aware of. But over pretty much everything else there was to argue about.

‘Did you pay the water bill?’

‘What do you mean you didn’t get beef?’

‘How are you breathing so damn loud?’

Minor issues, really, in the grand scheme of things. But it doesn’t take a therapist to work out that the issues they were arguing over probably weren’t really the issues they were arguing over. It did take a therapist to reassure me it wasn’t unusual that I couldn’t remember it all though. The first time I relayed my pick-and-mix childhood to a counsellor – at some point during my three years at university, when well-being is shoved down your throat – I asked whether it was normal, to have misplaced these things so easily.

‘What is normal?’ she asked.

I hate people answering a question with a question. But I said, as plainly as I could, ‘Being able to hold on to your childhood memories, for a start.’

She laughed. ‘They’re unpleasant though. Why would you want to hold on to them?’

‘Sometimes.’ She made a note of something. ‘Do you remember everything bad that’s ever happened to you?’

It felt like a trick question. ‘I mean, how would I know?’

‘Okay, do you remember everything good?’

It didn’t seem like the most sophisticated explanation for the human psyche I’d ever come across, but it sort of made some sense. For the years after that, I never thought there was anything strange in misplacing things that didn’t fit inside the proverbial filing system of my mind. Argument with a friend? No, thank you. An exam grade I wasn’t happy with? Absolutely not. Being fired from a job? Eesh, pass.

There’s a problem with that though.

See, at heart, I’m an honest person. But I’m not exactly the most reliable …

Posted by Creative Writing at Leicester at 03:54