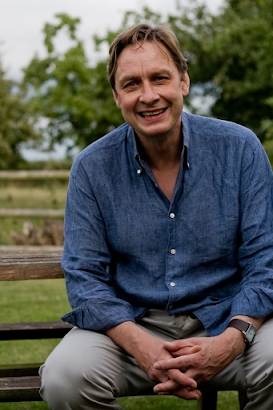 Stephen Johnson studied at the Northern School of Music, Manchester, and composition under Alexander Goehr at Leeds University, then at Manchester University. Since then he has written regularly for The Independent and The Guardian, and was Chief Music Critic of The Scotsman (1998-9). He is the author of Bruckner Remembered (Faber 1998), and studies of Mahler and Wagner (Naxos 2006, 2007). As a BBC broadcaster he presented Radio 3’s Discovering Music for 14 years, as well as a series of fourteen programmes about the symphonies of Bruckner. He is also a regular contributor to the BBC Music Magazine. Stephen radio documentary, Shostakovich: Journey into Light, was nominated for a Sony Award in 2007. And in 2009 his radio documentary Vaughan Williams: Valiant for Truth, won a Sony Gold Award. His book about music and mental health, How Shostakovich Changed My Mind (based on the Shostakovich documentary) was published by Notting Hill Editions in Spring 2018, followed in 2020 by a book about Mahler’s Eighth Symphony, The Eighth: Mahler and the World in 1910 (Faber). In 1997 Stephen began composing again. His orchestral work Behemoth Dances had its premiere in Moscow in April 2016, followed by its UK premiere in London in May. In January-February 2019 his Clarinet Quintet Angel’s Arc was performed by Emma Johnson and the Carducci Quartet, and an American premiere is planned for November 2020. Stephen's website is here.

Below, Stephen talks about How Shostakovich Changed My Mind, and you can also read an excerpt from the book. 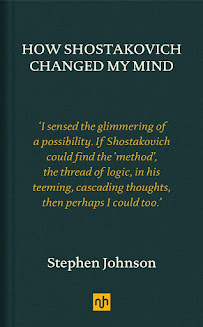 About How Shostakovich Changed My Mind

On one level my agenda in writing this book was intensely personal: I wanted to see if writing about my own experience of bipolar depression and childhood trauma might help me get it all into some kind of new perspective. I think it did, but in the process I realised there was another, still more important purpose. By writing about how important music - and particularly tragic music - had been in my own story of survival, I wanted to say to others who have gone through profound mental suffering, ‘Don’t despair. There is always the possibility of redemption, of finding a path from misery to meaning, and the music of someone like Shostakovich can help us find it.’ It still amazes me how a man like Shostakovich, nervous and to some extent emotionally fragile, was able to keep his sense of moral and emotional purpose under the constant surveillance of Stalin’s hideous Soviet totalitarianism, and to reach out to others in his music - I’ve met survivors of Stalin’s ‘terror,’ and of the indescribable suffering of the Siege of Leningrad, who insist that his music helped them. I’m one of many - possibly millions - who can say the same. The book looks at how the music achieves its effects from several different angles - neurological, psychological, philosophical - but it remains ultimately a personal testimony to something which, in the end, remains mysterious. I start with a reference to Kafka’s Gregor Samsa, transformed into an enormous insect in the harrowing story 'Metamorphosis,' who, on hearing a violin playing, asks himself, 'how could he be a brute beast if music could make him feel like this?’ That, in essence, is what the book is about.

From How Shostakovich Changed My Mind

I am sixteen, and I'm striding, stamping, pounding my way across the West Pennine Moors. The weather is bracing: sudden gusts of wind, tattered low clouds racing across the sky, occasional brief flurries of sharp-sided rain. It suits my mood perfectly. My head is full of the end of Shostakovich's Fourth Symphony. In my mind's ear I can hear it all in studio clarity. I'm half-roaring, half-spluttering along with it. I'm glad there's no one around to see me. But - of this I'm quite sure - I don't feel alone. Shostakovich knows what I am feeling. His music assures me of that. Perhaps he knows better than I do. But he has given me something else as well. He has given me his community: half-imagined, half-real. As he says, in the Fourth Symphony's last pages it's all set out rather precisely. There is a great choir that I can join: a choir of grief, rage and determination to survive. Where it is I don't know yet, but I know that it is. And while the music lasts I am part of it, one voice amongst many. Somewhere out there is a We to which I belong. The thought is comforting, sustaining, indescribably uplifting. When the final bars have faded into silence I stand still for a moment. I am not worthless, despicable, insignificant, unworthy to be heard; how can I be, if music can make me feel like this? 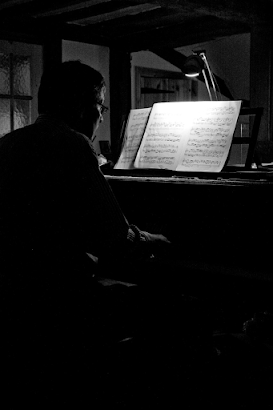 Posted by Creative Writing at Leicester at 01:59