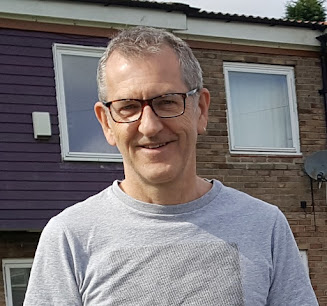 Alan Baker was born and raised in Newcastle-upon-Tyne, and has lived in Nottingham since 1985, where he has been editor of the poetry publisher Leafe Press for the last twenty years, and editor of its associated webzine Litter. His previous poetry collections include Variations on Painting a Room (Skysill, 2011), Letters from the Underworld (Red Ceilings, 2018) and Riverrun (KFS, 2019). He has translated the poetry of Yves Bonnefoy and Abdellatif Laâbi. Below, Alan writes about writing poetry, and his new pamphlet, A Journal of Enlightened Panic (Shoestring Press, 2020). 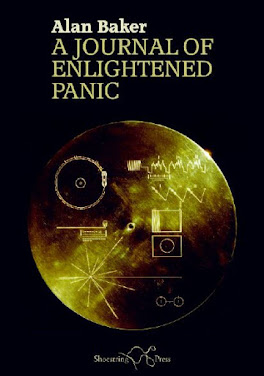 About Poetry and A Journal of Enlightened Panic

I still have strong connections with Newcastle (there's a poem in Tyneside dialect in A Journal of Enlightened Panic), but Nottingham is my adoptive city and I've lived there since 1985 (I recently published a book entitled Riverrun which is sixty-four modernist sonnets about the River Trent in its Nottinghamshire stretch). I started writing poetry in my teens, gave it up, then returned to it in my late twenties, but I didn't publish my first, slim pamphlet until I was forty-two. I've published ten collections of poetry since then. Why do I write poetry? Because I love it, always have - not writing it I mean, but poetry itself, reading it out loud, hearing it read, reading it silently, and I've loved it since I was a youngster enamoured of G. M. Hopkins and Robert Frost. So I wanted to "be in that number" as the song goes, and learn the art.

A Journal of Enlightened Panic is a short series of poems, most of which are dedicated to someone, mainly other poets, and includes a collaboration with the poet Robert Sheppard (see below). The collection starts and ends with two long poems. The last poem is called "Voyager," a reference to the spacecraft of that name; the poem is in memory of my mother, and it combines images of space travel, a night-time walk and a sea journey. The opening poem is about "the thoughts a man may encounter as he walks the park in the autumn of his life," which thoughts encompass ecology, art, politics, John Donne, Keats, Shakespeare and the Zen Buddhist master Sunryu Suzuki.

The disk on the book cover is the “Sounds of the Earth Record” which was placed in both Voyager spacecraft when they were launched in 1977.

If I were a blade of grass
I’d be bending in the wind
like all the others, in the wind
off the Karst that smells of the sea.
If I were rowing in the ripples
I’d be unrolling in crinkles of
light against the hills, distance
unthreading perception, gently.
If I were empty of perception
I could abandon History and encounter
The World, my enemy, my friend,
my teacher, in all its variousness.
If then, beyond Time, flung across Space,
a jay caught in a gust, I’d know
Identity is a silhouette bird acting as scarecrow,
choking up a paroxysm of irony.
If the scarecrow smiles, if Sirens
call lonely men on container ships,
and ghosts walk the leagues of grass,
then storm clouds, tribal wanderings, ritual.
If overhead wires trapped onto a page of dashes
tell us of nothing, or next to nothing,
then the solid black I feel is not ghostly solid:
my ears are up to my eyes in Reality.
Slovenia (excerpt)
An advertising hoarding of a rearing horse,
a railway platform reduced to a grey smear.
Slovenia! I'm sick of your posturing, I'm weary
of your constant demands for attention, your angst,
even the tightness you leave in our collective lungs
that the romance of a steam-train cannot relieve;
the rearing horse is a symbol for a British bank,
the trains run on time, sure, but they take us nowhere.
Hills hunch black like slag-heaps, while streamed cctv
images of cobbled streets and marble kerbstones
infiltrate our dreams; a pixelated Ljubljana Old Town
lacking its charm and suppressed memories.
Lit buses in long lines ease up the crowded street
packed with faces at bright windows, and I run
to catch one, full of workers heading home. My people?
"hard-working, diligent and proud" the brochures say,
using my tainted words. A queue, stiff in readiness,
waits, as one, his pin prick pupils deep in their sockets,
like a bronze statue of one of our obscurer saints, leans
forward and hisses "You can't get on without a ticket."

Posted by Creative Writing at Leicester at 07:54