Adam Roberts, "The This" 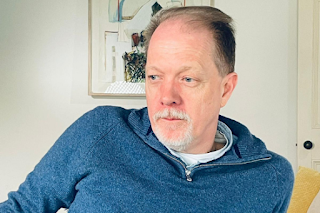 Adam Roberts is the author of 24 science fiction novels, and many non-fiction and academic works, including a History of Science Fiction (2nd ed, Palgrave 2016). He is professor of nineteenth-century literature at Royal Holloway, University of London, and lives a little way west of London. He blogs here. He also blogs here, and here. He probably has too many blogs, to be honest. 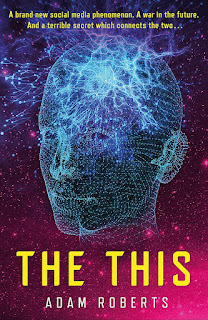 About The This, by Adam Roberts

The This is a pulp-science fiction novelisation of Hegel's Phenomenology of Spirit. The title refers to a corporation who market a device that, once it is inserted into the roof of your mouth and when it has embedded its tendrils in your brain, allows you to go online, post to social media and so on simply by thinking it; either a simple device to make your life easier, or perhaps a malign plot to recruit you to a hive-mind consciousness. But, really, the novel is  pulp-science fiction novelisation of Hegel's Phenomenology of Spirit.

You can read more about The This on the publisher's website here. Below, you can read an excerpt from the novel.

It was a sunny day. A marine-coloured sky. A scattering of bright white clouds were stretching their irregular-shaped wings. Birds circled. Rich paused on his building’s doorstep to put on sunglasses, and then navigated the mob of bins, gathered like ravers in the tiny front yard, mouths open at the gobsmacking splendour of the day. Then onto the pavement, turn left and along to the main road. He got his phone out and checked his feeds.

A wait at the junction, where the south circular traffic buzzed and fizzed its electric way westward and eastward. Rich on his phone, just like every other pedestrian, crowds at each of the four corners of this cross-hatched yellow box. All this infrastructure, set up in the last century to service that small fraction of the population who are actually blind had found new purpose in this century servicing the physically-sighted but functionally-blind populations walking about with their gazes kidnapped by their phones.

Bip-bip-bip-bip, and Rich stretched his legs and strode across.

Past the station and down the hill, swerving as and when another sightless pedestrian approached in the opposite direction with that fifth sense modern humanity has developed since the invention of these screens, these ubiquitous screens, these unignorable screens. An electronic patter of unignorable status updates, and he couldn’t look away. The map-app pinged him to turn left. He was at the river. Putney bridge, which is of stone, wearing its row of Victorian-style lampposts like eyelashes. And there was the Thames, still not weary after forty thousand years of scouring its gravel bed and pouring itself into the sea. The air smelt of silt and brine and vaguely of something tartly chemical, which fact barely registered on Rich’s sensorium. Rich didn’t look at the river. It’s not as though he’d never seen it before, after all. Eyes on his phone he trotted down Lower Richmond Road and stopped when his map-app sounded its little alarm.

There is a word that always describes where we are, of course.

Rich finally disengaged his eyes from his phone. The Putney offices of The This were a new-build seven-storey weave of glass, helixing whitestone pillars and steel. It looked expensive which, Rich assumed, was the point. He walked up the ramp. Doors swished away before him and reconnected behind him and he was in a marble hallway.

‘Hello?’ he said to the receptionist. A real live human, paid to sit behind a counter all day. Rich moved closer, smacking the marble as he walked as if his own feet were slow-clapping him. ‘I’m Rich Rigby. Differencework have set-up a quick interview with,’ he checked his phone, ‘Aella Hamilton?’

Posted by Creative Writing at Leicester at 01:19