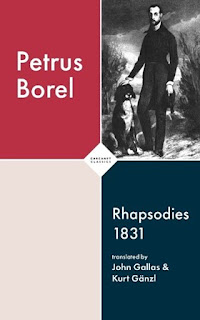 ‘Borel was the sun,’ said Théophile Gautier, ’who could resist him?’ Indeed, who? A lycanthrope, necrophile, absurd revolutionary, Paris dandy with a scented beard, flamboyant sufferer: a man with no grave and no memorial.

His once celebrated red mouth opened briefly ‘like an exotic flower’ to complain of injustice and bourgeois vulgarity; of his frustration in love and reputation; of poverty and blighted fate. Then he withered in the minor officialdom of Algeria, where he died because he would not wear a hat, leaving a haunted house and a doubtful name. ‘And now,’ says his eccentric biographer Dame Enid Starkie, ‘he is quite forgotten.’

Rhapsodies includes all the poems Borel wrote when he was twenty and twenty-one. At the time he sported a red waistcoat, wide-brimmed hat with ribbons, black cloak thrown over his shoulders, and was followed about by admirers. The poems, he said, are ‘the slag from my crucible’: ‘the poetry that boils in my heart has slung its dross.’ It is a fabulous, fiery, black-clouded dross: captains and cutlasses, castles, maidens, daggers, danger; calls to arms, imagined loves, plaints and howls of injustice. ‘Never did a publication create a greater scandal,’ Borel said, ‘because it was a book written heart and soul, with no thought of anything else, and stuffed with gall and suffering’. It was not reviewed. Now it is back. 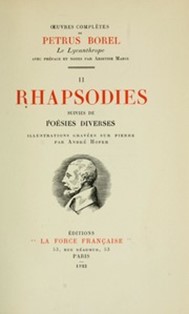 Borel, Rhapsodies: Why & How, by John Gallas

My first book of translations for Carcanet, The Song Atlas, featured one poem from each country of the world, according to the (then – and since updated) Official United Nations List. Six years of finding poems, discovering and persuading first-draft translators, and then, myself, re-poeming the results, persuaded me that translating was both deeply enjoyable and deeply worthwhile.

How else would English-reading folks ever get their glorious glimpses of Mango (Guyana), ‘2 Termite Skyscrapers’ (CAR), or the poetry of Ojars Vacietis (Latvia) or Gonzalez Prada (Peru)?

The method for The Song Atlas is the one I have always used: a native-speaker translates the poem, once found and usually chosen by them, into a word-by-word, line-by-line English version, which I then ‘re-poem,’ using any notes provided hinting at, or describing, tone, rhyme, gravity (or not), metre, and anything else they think relevant. As a language-free New Zealander, with only a sprinkling of Anglo-Saxon and Old Icelandic, and an almost complete lack of other-language-learning aptitude, my reliance on others is happily total.

It’s said that the poems of The Song Atlas and 52 Euros often ‘sound like me.’ Any poet/translator, working at a poem with their full bag of skills and commitments, must, I think, perforce produce something like and of their own kind. I have no theories about the translation of poetry: only that it is a good thing when well done. For a poet (of 10 Carcanet books and 15 others elsewhere of my own poetry) translating is a fascination: freed from providing the ‘original’ emotions, thoughts, feelings, ideas and some elements of personal style, the performance becomes an exercise in a kind of different sameness, a meticulous making of something ‘other’ that requires all the efforts, skills and sympathies usually put to work for one’s ‘self.’

Kurt Gänzl, my brother, was the French-native-speaker for the Song Atlas translation of Belgium’s entry - ‘Spade,’ by Emile Verhaeren (1855-1916) - as well as for several other French-language poems in the book. We particularly loved the Verhaeren poem, and when it came to putting together 52 Euros (also Carcanet: a translation of 52 European poets, being an A-Z of male and female writers, each represented by a selection of their poems), we collaborated on 10 of his poems for ‘V is for Verhaeren.’

Kurt is a prompt and meticulous worker, and a clear-headed indicator of the ‘kind’ of poem he is translating, which information and ideas are much appreciated at this end (he in NZ, me in Leicestershire). Being brothers, we understand what we are each getting at, and often At Speed.

Well, we were looking for a new challenge, at first simply for enjoyment’s, and perhaps a small contribution to a magazine’s sake. Borel seemed unknown, and apparently untranslated into English, and the text of Rhapsodies was available online. So we began with ‘Prologue,’ ‘Benoni’ and ‘The Olden Captain’ and, pleased with the results, agreed we would try a few more.

At this point I found Enid Starkie’s biography of Borel. I bought it, and read it with some trepidation, hoping not to find some description of his style hopelessly at odds with what we had produced. Not only did this not happen, but it became clear that Petrus Borel’s life was patchily known, and thus Enid Starkie’s book was padded out with contemporary matters in nearly every second chapter. Why did it matter? It is somehow more satisfying to a translator to at least in some degree ‘discover,’ and be first with their subject and their matter. So we continued with a certain excitement, Enid Starkie’s apparent judgement being (a) that Borel was worth a book, being her biography, and (b) that he was a major-minor, or minor-major poet. Perfect. Such poets and their poems often make for translating at its best.

Here, Carcanet, Michael Schmidt, and PN Review gave us a happy kick. Editor Michael Schmidt liked the poems thus far, and urged us on. We were, quite suddenly, looking at the whole book. Kurt was doubtful: there was a ‘bit of a play’ in there, and a long Preface, and some strange, whirling poems that seemed on the lunatic side. But we gamely decided we would do the job entire.

Slowly but surely – over two years – Petrus Borel and his Rhapsodies took shape in all their mad, posturing, sensational, gut-wrenching, self-advertising, cod-revolutionary, egotistical brilliance. Even the ‘bit of a play,’ a well-rhymed Gothicky melodrama, and the Preface, a splendid rant of self-importance and undoubted commitment, were hugely rewarding. As Kurt fell more and more out of love with M. Borel himself, and his strutting self-pity, I found his confused and frustrated emotions, ‘safe’ revolutionisms, sensational plots, super-added populism+egoism, and radical carelessness mixed with desperate concern to sell, make money, and be liked, more sympathetic. At the same time, of course, Kurt became more and more admiring of Borel’s style, method, originality and ‘swing,’ which I could do nothing else with but try my very best to reproduce with Kurt’s guidance.

In the end, Preface and Play, the long and the short, we did the whole book. Here it is, in all its wild whirl, as a Carcanet Classic, with the (we think) wonderfully apposite tag-line – ‘It’s back.’ It is that kind of volume.

You can see more about the book on the publisher's website here. Below, you can read a sample poem from it.

To my dear friend, Jules Vabre:
excellent marrow!
with your little spyglass
on the Fat-Well-Off and their big-bald chins –
you and I must be Martians
on this pale and ordered Earth!
Ah, we must be emmets,
doing what we will, here,
in this pithless Paris,
hither and thither like haywisps on water,
like tonic eddies
through a fly-blown swamp.
Ramblers sans rooves, pewless and
popped from our containers
to live! live slaphappily
like sparrers dancing
on chimneytops!
Wildcats waiting in the wings,
the goggling crowd,
and then, up-curtains please!
we cross
the light-lit stage of Life.
Posted by Creative Writing at Leicester at 09:02