My PhD in Creative Writing: "You'll Fall Through All Those Boys" 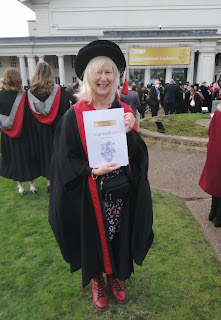 As a young woman, I travelled around Asia and settled in Australia for ten years. In those early days, I temped in offices and made clothes for market stalls. In my spare time, I wrote poetry and dabbled in storytelling. When I returned to the UK, I was thirty-four when I graduated with a BA in Teaching, Design and Computer Studies. For the following eight years, I lived in London working for a publishing company. After that, I did a TESOL course, which led me into university lecturing. I taught English before running my own course, a BA in English and Creative Writing. After studying for an MA in Creative Writing, I never imagined myself doing a PhD. However, in 2015, I took an idea to Jonathan Taylor at the University of Leicester. Then I spent six years studying for a PhD in Creative Writing, while continuing my work as Course Director. In January 2022, at the age of 63, I graduated with a Doctor of Philosophy.

My PhD is a family memoir, and the thesis is on truthfulness. I found time to study by having a non-teaching day each week. Then, every two months I spent hours in a café talking to my supervisor about memoir, research, and how to write a truthful portrait of my parents before I was born.

The memoir explores the effect of war on my parents, and starts in 1943. I alternate the chapters, so their stories run alongside each other until they meet in 1949. The structure reveals their differences, and how their experiences and losses led to a hasty marriage. My young father, a Coldstream Guardsman, is posted to Germany. His mission is to repatriate Displaced Persons (DPs), mostly Poles, and send them home. He also escorts POWs to trial, and guards the German borders, stopping anyone trying to escape Stalin and his troops in Poland. While in Germany, he falls in love with a woman and has a child. Meanwhile, in North Devon, my mother, like many women during the war, falls in love with a GI. The US army are training in Woolacombe. Her story follows this affair, and time spent at her grandmother’s luxury hotel.

My PhD explores truthfulness in life writing. In the memoir, I am a ghost from the future, following my young parents, observing their behaviour and narrating their stories. However, immersing myself in their stories, at a time before I was born, goes against the grain of much nonfiction writing. For me, though, my mind travelled backwards in time, and I experienced scenes, people and emotions, as if present. My spectral presence tapped into a different kind of truthfulness I was unable to find through writing a more traditional type of memoir. I could explore the 1940s like a time-traveller. My mind became a movie of my parents’ young lives. I found my ghost narration flowed naturally, unravelling memories that appeared obscure but true.

I found all this puzzling until I read about the concept of Postmemory. Postmemory is when children acquire the memories of their parents, which become embedded within their own memories. Through ghost narration, I was drawing from my postmemory experiences as a child. I grew up with my mother’s constant retelling of her wartime experiences, and my father’s silence about his, which resulted in his violent behaviour.

I called the memoir You’ll Fall Through All Those Boys. My great grandmother said this to my mother when the GIs first arrived in Woolacombe. My mother was a sophisticated seventeen-year-old at the time. And the title works for my father’s story too, as a soldier in the Coldstream Guards.

Below is an extract from one of my mother’s chapters in the memoir. 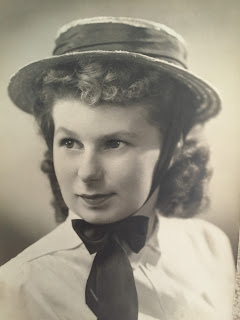 From You'll Fall Through All Those Boys

The grandfather clock chimes twice in the hall. We hear it from the porch at Combeside, where I wait with my mother. This afternoon, she is wearing a blue velvet dress with a white collar. The day is warm, and her coat is lying next to us on the bench.

He removes his cap and blushes. To cover it up, he points to a jeep parked across the road.

His words stretch out like a Southern-American folk song.

‘It’s fine,’ says my mother with a big smile, ‘but only if you let me drive.’

I am now in the back of a jeep, bumping up and down, and sideways too. We pass the toilet block at the top of Mortehoe Hill and see the roof has been blown off.

‘Apologies, ma’am,’ shouts Bud. ‘We had a little accident yesterday.’

Why are toilets such a popular target for the US army?

The jeep’s canvas has been pulled back, and I laugh to see my mother’s hair blowing about. She clings to her hat with one hand, while driving with the other.

This is fun, I think.

Ilfracombe, ten miles north of Woolacombe, is full of GIs too. Military vehicles are lining the streets here, and soldiers clog up the pavements. It is worse in the evenings, when buses arrive full of the soldiers based in Woolacombe. Everyone heads for the George and Dragon, which is where we are now.

Bud and my mother chat away all afternoon, at ease in each other’s company. From a little window at the back of the George, I hear waves crashing against the rocks below. My mother seems happy. Perhaps the happiest I have seen her since she first met Bud, and skipped all the way back to her grandmother’s hotel ... 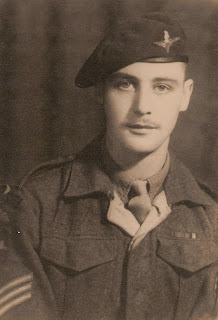 Posted by Creative Writing at Leicester at 08:48