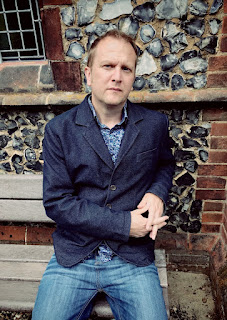 Edward Parnell has an MA in Creative Writing from the University of East Anglia. He’s been the recipient of an Escalator Award from the National Centre for Writing, and a Churchill Fellowship to fund a research expedition to the Australian Outback. The Listeners, his first book, won the 2014 Rethink New Novels Prize. His latest book, Ghostland (William Collins, 2019), is a work of narrative non-fiction that was shortlisted for the PEN Ackerley Prize 2020 for memoir and autobiography, and for the East Anglian book awards. Edward is a keen birdwatcher and naturalist, which also informs his work. His website is here. 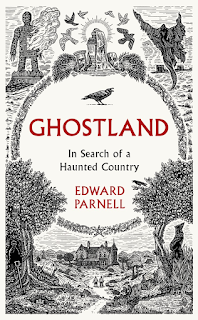 About Ghostland: In Search of a Haunted Country

In his late thirties, Edward Parnell found himself trapped in the recurring nightmare of a family tragedy. For comfort, he turned to his bookshelves, back to the ghost stories that obsessed him as a boy, and to the writers through the ages who have attempted to confront what comes after death.

In Ghostland, Parnell goes in search of the ‘sequestered places’ of the British Isles, our lonely moors, our moss-covered cemeteries, our stark shores and our folkloric woodlands. He explores how these landscapes conjured and shaped a kaleidoscopic spectrum of literature and cinema, from the ghost stories and weird fiction of M. R. James, Arthur Machen and Algernon Blackwood to the children’s fantasy novels of Alan Garner and Susan Cooper; from W. G. Sebald’s The Rings of Saturn and Graham Swift’s Waterland to the archetypal ‘folk horror’ film The Wicker Man …

Ghostland is Parnell’s moving exploration of what has haunted our writers and artists – and what is haunting him. It is a unique and elegiac meditation on grief, memory and longing, and of the redemptive power of stories and nature.

Below, you can read a short excerpt from the book.

From Ghostland, by Edward Parnell

I arrived with the dusk on a biting, slate-skied afternoon, a mixture of sleet and snow starting to fall as I made my way up the path that coiled around the hillside. The light, dim to begin with, grew steadily darker as I wound higher. Three redpolls – small finches I picked out from their high-pitched, questioning calls – flew over my head, looking for somewhere to roost, though they would have more luck down in the shelter of the mound than at its summit.

I was visiting Glasgow’s gothic monument to death, its sprawling memento mori (from the Latin ‘remember you must die’): the Necropolis. The site covers a hill behind St Mungo’s Cathedral, giving an impressive panorama of the city. Formerly rocky parkland, in 1831 it was given over to afford ‘a much wanted accommodation to the higher classes’ that would be ‘respectful to the dead, safe and sanitary to the living, dedicated to the Genius of Memory and to extend religious and moral feeling.’ Since then, various extensions to its original area have been made, alongside fifty thousand burials in 3,500 brick-partitioned tombs.[1]

No one else was about – they probably had more sense on this bitter afternoon at the back end of 2014. I’d gravitated here, pulled by the name, and by the pictures I’d seen of the place’s impressive architecture – as well as the melancholia of my own mood – after tagging along to the city with my partner, who was here for a work conference.

In particular, I was drawn to one of the Necropolis’s most imposing structures, the Aiken Mausoleum, its classical pillars and portico half-hidden by tangled ivy and creepers. Peering through the wrought-iron gates that locked across its front I could just read some of the words on the memorial plaques inside.

More disconcertingly, in the darkness I could also make out a rectangular opening that presumably marked the steps down to the graves themselves, though the paltry torchlight from my phone did not show any detail. Was it spooky? Perhaps a little, but the lights of the city, multiplied at this time of year by those of Christmas, were close. And I was used to wandering in such places – albeit not quite as grand as this – as, for five years as a boy I had been a chorister;  for a dare we would sometimes run through the graveyard of the town’s thirteenth-century church after evensong on winter Sunday evenings, pausing midway to touch the top of the coffin-shaped tomb with the foreboding cleft through its lid.

In my present, too, walking back from the train station to my own house after dark I have to pass along an unlit lane that runs beside the local cemetery. Just before the darkest point, where the trees crowd in from both sides, the curve of the road and the low flint wall to the left look almost identical to the Victorian artist John Atkinson Grimshaw’s Moonlight Walk – the self-taught Yorkshireman specialised in realistic, slightly unsettling nocturnal scenes – which features on the cover of my paperback copy of M. R. James’s Collected Ghost Stories. Sometimes as I enter that last stretch I picture myself as the painting’s lone figure, dwarfed by the darkness.

So, wandering in the Necropolis at dusk – even with the ghost of a snowstorm in the offing and ghosts in my head – I didn’t find the surroundings frightening. Indeed, the stones, with their solidity and timelessness, seemed to extend a kind of comfort to me. I felt worn out and undone and, at that moment, if I had been offered the chance to step inside the bars of the mausoleum and to take an unending sleep within its walls, I might well have chosen the memory-wiped relief of that option. But the stinging wind had gathered pace and was pushing me onwards, along with a darkling winter thrush – a redwing that skittered up in front of me from a leafless tree.

[1] I’m not sure anyone else does a graveyard with quite the grandeur and solemnity of the Scots. Edinburgh, too, is riddled with impressive assemblages of dark-stoned monuments to the departed, in kirkyards like St Cuthbert’s and, particularly, Greyfriars. At the latter, the maudlin Skye terrier Bobby supposedly sat in mourning by his master’s grave for a fourteen-year stretch in the middle of the Victorian century – the canine embodiment of the public grief of the monarch for her lost husband, with which the lone dog’s vigil coincided.

[2] I was lured into joining my local church choir through the promise of its midweek games club and various exciting-sounding day trips out – not because of any religious devotion on my part (or of that of my parents).

Posted by Creative Writing at Leicester at 01:46