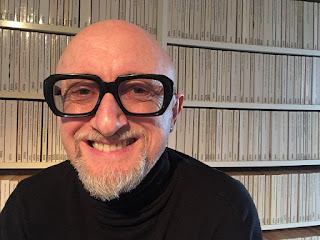 Nicholas Royle is the author of four short story collections – Mortality, Ornithology, The Dummy and Other Uncanny Stories and London Gothic – and seven novels, including Counterparts, Antwerp and First Novel. He has edited more than twenty anthologies and is series editor of Best British Short Stories. He runs Nightjar Press, which publishes original short stories as signed, numbered chapbooks, and is head judge of the Manchester Fiction Prize. His English translation of Vincent de Swarte’s 1998 novel Pharricide is published by Confingo Publishing. He lives between London and Manchester and teaches creative writing at Manchester Metropolitan University.  For more information visit: @NicholasRoyle http://www.nicholasroyle.com/ 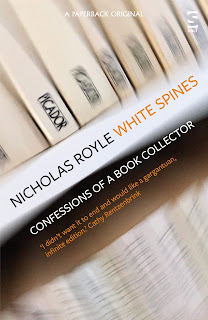 A mix of memoir and narrative non-fiction, White Spines is a book about Nicholas Royle’s passion for Picador’s fiction and non-fiction publishing from the 1970s to the end of the 1990s, when the publisher stopped its commitment to the distinctive white spine with black lettering.

White Spines explores the bookshops and charity shops, the books themselves, and the way a unique collection grew and became a literary obsession. Above all, it is a love song to books, writers and writing.

You can find out more about White Spines on the publisher's website here. Below, you can read an excerpt from the book.

From White Spines, by Nicholas Royle

I have a sense that Clarendon Books, around the corner on Clarendon Park Road, could be the highlight of my afternoon and, indeed, when I get there the signs are good. In one of the boxes outside is a copy, albeit in poor condition, of Christopher Kenworthy’s short story collection Will You Hold Me? I’ve known Chris as long as I knew Graham Joyce, since the late 1980s. He has lived in Australia for many years now. His collection contains some of my favourite short stories. They are as affecting as they are odd. ‘Odd,’ in my opinion, or in this context anyway, is an entirely positive descriptor.

As I push open the door of Clarendon Books, the carpet beneath it rucks up. I poke my head around a pile of books and apologise to the proprietor. ‘It’s been happening all day,’ he tells me. Clarendon Books is similar to Tin Drum Books, although with more books crammed into less space. I find a Picador by John Cowper Powys that I don’t have – Weymouth Sands. When I get it home it will join five others of his books and the six of them will account for an impressive nine inches of shelf space. Cowper Powys, a writer of unusually long books, died the year I was born, our lives overlapping for only three months. It says on the back of Weymouth Sands, ‘… the stones of Chesil Beach are as much characters as the human beings.’ Some might have said something similar of a more recent novel by another author.

I reach, breathlessly, for what looks like an early Picador. It’s Peter Wahloo’s The Lorry, one of the first eight, which I don’t have and have never even seen. I look at the cover, which, when I get it home, will be one of only two Picador covers in my collection to feature the work of Salvador Dalí, the other being the artist’s own and only novel, Hidden Faces. Gingerly I open The Lorry to the flyleaf, expecting its scarcity to be reflected in the price, but it’s actually cheaper than the other books I’ve selected. I take four books to the till and remove a £10 note from my wallet that I hope will cover the cost (I should really be able to add four prices together in the time it takes to reach the till from any position in Clarendon Books). ‘Let’s call it £8,’ says the man. ‘Thank you very much,’ I say as a feeling of warmth similar to the one I had in Tin Drum Books starts to suffuse my entire being. I leave the shop and, as I walk back to Queen’s Road, I tot up what the books should have come to – £8.05 ...

Posted by Creative Writing at Leicester at 09:17