Alan Bilton, "The End of the Yellow House" 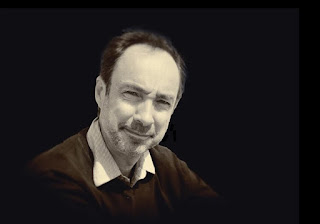 Alan Bilton is the author of two dream-like novels, The Sleepwalkers’ Ball (described by one critic as "Kafka meets Mary Poppins") and The Known and Unknown Sea, as well as a collection of surreal short stories, Anywhere Out of the World. His new novel is The End of the Yellow House. He has also written books on silent film, contemporary fiction, and the 1920s. He teaches Creative Writing, Literature and Film at Swansea University.  For more information go to www.watermarkpress.co.uk or alanbilton.co.uk or follow on Twitter @ABiltonAuthor 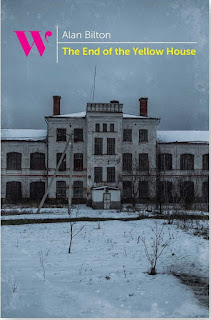 About The End of the Yellow House, by Alan Bilton

The End of The Yellow House is set in Central Russia, 1919, in a sanatorium cut off by the chaos of the Russian civil war. There, the murder of the chief doctor sets in motion a nightmarish series of events involving mysterious experiments, the secret police, the Tsar’s double, an enigmatic ‘visitor,’ giant corpses, possessed cats, sorcery, and the overwhelming madness of war. Both a dreamlike history of Russian psychiatry and a page-turning whodunnit, the novel subverts the conventions of the historical novel to provide a wildly exuberant historical phantasmagoria.

You can read more details about The End of the Yellow House on the publisher's website here. Below, you can read an extract from the novel.

From The End of the Yellow House

Of course, in many ways the news of Chief Superintendent Lepinov’s demise was no great surprise. Lepinov was an incorrigible melancholic, a chronic hypochondriac, and, despite his advanced medical training, a devoted spiritualist. He spoke of himself as “a mere visitor to this pale world” (he’d been twice arrested for tax evasion) and described Death as “his one true wife.” Typically, his sentences began as a whisper and ended as a shout – almost as if he were picking up messages from the other side. The guests in the Yellow House both feared and despised him. Lepinov would inspect their tired bodies, sigh deeply, and conclude his diagnoses with the doleful conclusion that “from dust we came and to dust we shall return.” “We are all but temporary guests here,” he averred, “awaiting that invitation that we cannot refuse.” As a scientist, he had his eccentricities. The Superintendent refused to wear a pocket watch, because there was no such thing as time. He wouldn’t allow his apartment to be cleaned because the souls of the departed lived on as dust. He clapped his hands twice upon entering a room. “I’m not long for this world,” Lepinov would say at meal times – “why not add a little sugar to the kasha?”

He was also (and this despite the chronic food shortages plaguing the yellow house) enormously fat. Whilst other doctors and guests wasted away, Lepinov ballooned like a pregnant sow. No one knew from whence he received such calories. It was well known that he did secret deals with Shemiakin the Bagman, exchanging morphine for goods from the city, or (malicious tongues whispered) stealing the guests’ possessions and selling them on for drugs. Despite the presence of bandits, deserters and anarchists, Lepinov was in the habit of taking long walks in the woods, returning without mushrooms or berries or roots of any kind. At night, he received unknown visitors, admitted by Nikolai, but unseen by anybody else. Yes, everything about him was odd. Urodlivy, the peasant, had cursed him. He had enormous green bags under his eyes. One of his fingernails was so long it had started to curl.

And besides – why not Lepinov? Since the war had started, Death was as likely to snatch the Chief Superintendent as any other.

Posted by Creative Writing at Leicester at 10:30