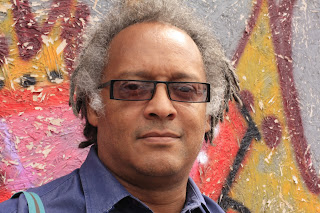 Pete Kalu writes crime fiction, scifi and YA novels. He also pens short stories in styles ranging from realist to surreal to the carnivalesque. Until recently, he ran a carnival band called Moko Jumbies. More on his website here and on Twitter @peterkalu and Instagram @petekalu. 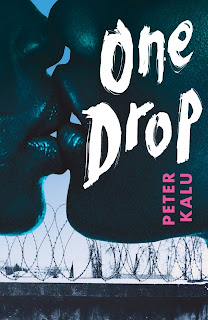 About One Drop, by Peter Kalu

One Drop is  Malcolm X meets George Orwell: a dystopian novel that looks through eyes of two black teenagers – Axel and Dune – at what might happen if demagogues gained power and used technology to crush resistance. In war-torn Britain, inseparable Black Radicals Axel and Dune are arrested. With SIMs implanted in their heads, they are placed in a prison camp for those who defy the Bloods’ white supremacist government. The SIMs start brainwashing them with the Bloods’ evil philosophy, and drones constantly monitor their movements and thoughts.

In this living nightmare, the couple battle to keep their love alive and to break free. The odds on survival are long. Dune and Axel have very different takes on how to escape. But when things come to a head, will their love hold them together and set them free, or will it tear them apart?

Below, you can read a short sample from One Drop.

The London wind had got up and was blowing bomb smoke from the south, from far beyond the fences that held us in. The smoke was a wall, maybe half a mile high and wide enough to blow across the entire prison camp, which it did. Soon we were choking in it. I wanted to duck down but Dune said ‘No, let’s stay out.’

So we gauzed up our mouths and noses and sat there, squinting, letting it blow over us. It surged on, tugging in its wake everything that had been trapped within it, and lifting up new stuff. Cinder from the cooking fires, rust from burned-out cars, bits of plastic, rags, a fugitive wanted poster. The smoke storm hurtled along, carrying alarmed cries from the tent zone and the screeches of birds that were pulling away before the rolling wall of smoke.

We held onto each other, me and Dune. It blew over fast. No longer than twenty seconds. When I slipped off my gauze, I saw Dune was twitching, the pupils of their eyes flexing, and their limbs stiffening.

They nudged me. - I think I’m fading, the drones are gumming me again.

It was one effect of the gumming. The repetition.

I could see it had passed. Dune was OK. Shaken but OK.

I put Dune in a headlock the way they loved, and they laughed and pretended to struggle, squirming and bucking and laughing into my halter top all at the same time.

I didn’t know it then but soon Dune would be gone and that would be the last time I headlocked them. Right now, their legs were kicking, their hips jerking, their lips rubbing the cotton straps at my collar bone, their Afro tickling my chin.

- No way can you wriggle free, I got moves on moves!

gif by Akinyemi Oludele, inspired by the book

Posted by Creative Writing at Leicester at 03:24