Kim Moore, "What the Trumpet Taught Me" 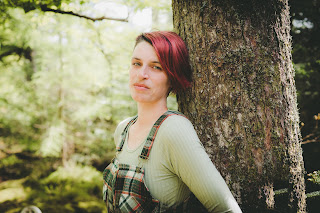 Kim Moore, photograph by Lorna Elizabeth
Kim Moore‘s first full length collection The Art of Falling was published by Seren in April 2015 and won the Geoffrey Faber Memorial Prize. She won a New Writing North Award in 2014, an Eric Gregory Award in 2011 and the Geoffrey Dearmer Prize in 2012. Kim was one of the judges in the 2018 National Poetry Competition, along with Kei Miller and Mark Waldron and a judge for the 2020 Forward Prizes.
Her first pamphlet If We Could Speak Like Wolves was a winner in The Poetry Business Pamphlet Competition, judged by Carol Ann Duffy. If We Could Speak Like Wolves was chosen as an Independent Book of the Year in 2012 and was shortlisted for the Michael Marks Pamphlet Award and the Lakeland Book of the Year Award. Kim’s latest full length collection is All the Men I Never Married (Seren, 2021).
Kim is originally from Leicester. Her website is here. 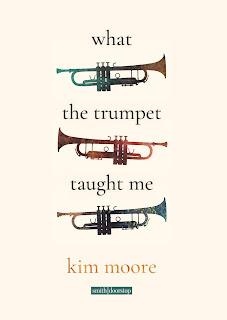 About What the Trumpet Taught Me, by Kim Moore

Award-winning poet Kim Moore studied music and was a trumpet teacher for several years. What the Trumpet Taught Me is a collection of vivid and immediate snapshots, from first lessons to music college, and from teaching the trumpet in schools and running a brass band, right through to playing in working men’s clubs in a ten-piece soul band.

Meditative and often funny, these short prose pieces are always open to experience and clear-eyed about the vagaries of class-prejudice and the intricacies of gender in a predominantly male world. The trumpet is the central character that we always return to as we are asked to consider the pivotal role of music in both an individual and social history.

What the Trumpet Taught Me features watercolour illustrations by Emma Burleigh.

From What the Trumpet Taught Me

My parents take us to a brass band, recommended by my new brass teacher, Mr P, as a place we can get an instrument for free. I ask for a cornet, after watching a young girl playing one with a pearl-like sheen. My sister is given a tenor horn. The conductor, who says we can call him by his first name, W, tells us to join in with the rehearsal, though we cannot read music. I’m told to sit next to a girl with a fox-like face.

I don’t understand why the music in front of me has numbers above each note, rather than letters. I don’t understand that the numbers correspond to the valves I should be pressing down. I don’t even know they are called valves. I’m happily playing along, pressing the valves whenever I feel like it. I don’t know a conductor can hear one person playing a wrong note, even when there are thirty other people playing. Eventually, when I find this out, it seems as if it’s a superpower, and one I’ll never possess.

W is an elderly man with bone-white hair. He waves his arms, urging us onward. Although it doesn’t seem as if anybody is looking at him, or noticing what he’s doing, I understand he is important, that the weather of the room starts and finishes with him. 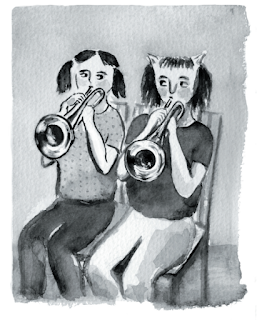 Posted by Creative Writing at Leicester at 03:17