Shreya Sen-Handley, "Handle with Care: Travels with My Family (To Say Nothing of the Dog)" 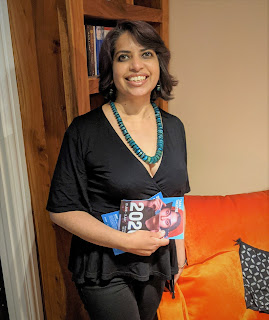 A CNBC and MTV journalist and producer, and East India head for Australasian Channel [V], Shreya Sen-Handley has authored three books for HarperCollins: the award-winning Memoirs of My Body (2017), short story collection Strange (2019), and travelogue Handle with Care (2022).

A Welsh National Opera librettist, the first South Asian woman to write international opera, she has written for their film series Creating Change (2020), and operas Migrations (a 200-performer production touring Britain in 2022) and Blaze of Glory (2023). Her play Quiet premiered in London with award-winning Tara Theatre (2021).

A columnist for National Geographic, CNN, The Guardian, and more, she also writes a syndicated newspaper column for India. Her essays can be found in anthologies, including the University of East Anglia’s Writing Places (2019) and Hodder Education’s British secondary school English textbook, Detectives (2020).

Her short stories and poetry have been published, broadcast, and shortlisted for prizes in Britain, India and Australia. In 2020, her poetry spearheaded a British national campaign against hate crimes. 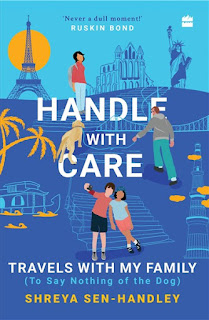 About Handle with Care: Travels with My Family (To Say Nothing of the Dog)

Shreya Sen-Handley’s Handle with Care is a blithe and zippy travelogue that chronicles her adventures around the globe. In tow, most of the time, is the ‘quirky clan’ comprising her British husband, their two children, and their dog.

Here are tales of the world beyond south Kolkata and Sherwood Forest – places they call home. From much-loved Indian locales like Rajasthan and Kerala to bustling international capitals like New York and Paris, from English idylls like Dorset and Haworth to the sleepy pleasures of Corfu – the journeys are described in vivid detail, seasoned with humour, and sprinkled with wise trip-tips. No matter how gruelling the trek, you weather the storms well, and while you’re about it, have tons of fun, food and epiphanies. Mishaps or not, one learns, there is always magic to find.

These are delightful stories that’ll take you places without having to move an inch!

Here is author, naturalist and TV presenter Lee Durrell’s description of the book: “I feel a deep personal connection to this book. Gerald [Durrell] always told me that one of the reasons for his family’s move to Corfu was that his mother, Louisa, missed India terribly. She had been born, married and brought up children there, relocating to England only because of the sudden death of her husband. In the grey, damp and cold, she pined for the vibrant sights, sounds, scents and tastes of India, for the company of a warm and generous people, and the vivacity and colour her life had once had. Corfu, so like India in these many ways, rekindled her love of living. In this book we’re immersed in India, Corfu and all other points of the compass, the author skillfully guiding our way and revealing the treasures that each and every place surely has. But above all, this is a book about love – romantic, parental, familial and whatever the word is for the family dog. About love of place, history, literature, poetry and art, all around the world. It celebrates adventure and fun.”

From Handle with Care, by Shreya Sen-Handley

From the chapter ‘Corfu: Garden of the Gods’

Exploring the villages and beaches, we stopped to refuel at the open-air tavernas that dotted every jetty, roadside, and spit of white sand. As delicious as the food was, with an abundance of aubergine, lamb, and feta cheese, the joy of taverna-hopping was as much about the varying views it offered each time. The finest were, of course, on the beach, looking out at the cobalt blue Mediterranean Sea, but the roadside ones were perfect for watching people, who were as colourful and chaotic. We enjoyed sniffing out markets just as much, some big and bustling, others secretively tucked away, and a few twinkling around harbours like seashells lost in the sand. From these we bought baskets of fresh, flavoursome food, and the occasional trinket. We swam in the sparkling sea too, but it was a cooler summer than usual, and more joy was to be had in walking along its pristine shore. These delights were entwined with our search for the Durrells’ old villas – the strawberry pink, the daffodil yellow, and the snow white, preserved in my memory from childhood.

We decided to give many of the better-known and disputed sites a wide berth for the hidden gems, even if their links with that famous family were just as weak. This took us to many quiet lanes, overgrown copses, and deserted watering holes no one had set foot in in years. Some we set out to find and never did, some we discovered to be disappointing, so devoid were they of mystery and romance, and others we stumbled upon by chance. Many we drove up to, especially if they were on elevated ground, smelling of evergreens and dusk, so late in the day did we arrive after hours on the hunt. To get to a few though, we had to abandon the car and walk down dense tracks, following glimmers of sunlight, and our instinct for the hidden and the glorious. In an abandoned orchard we followed a pearly glow to find a diminutive but dazzling edifice that was well worth the nettle stings, but not likely to be the Durrells’ snow-white villa for how few of their extensive menagerie of guests and pets it could have held. Down a path of long grasses heading out to sea, we discovered a vibrant yellow establishment, like a sunflower in a field. But we both agreed after a cursory search that it lacked the required je ne sais quoi to be their daffodil-yellow villa.

It was on our way back from this find that we decided to stop for a picnic in a sun-dappled olive grove we’d spied earlier. After a satisfying meal of fresh bread, olives, and feta-stuffed tomatoes, we decided to explore. It was then that we discovered the house concealed in the cypress trees. A house we weren’t expecting because it wasn’t on our map. In a patch of land humming with life but deserted by humans, stood a faded ruby villa, large enough for a boisterous family and its many wards, but not so large that it couldn’t lose itself with time and the onrush of vegetation. We circled it, standing on its vine-entwined porch, looking in through its weathered windows, but as desolate as it clearly was, it felt oddly lived-in too.

We sat on the porch, breathing in the tranquillity of the moment and the reticent beauty of our setting. When my husband put his arm around me, I lay my head on his shoulder, and a few kisses were exchanged. When he leaned in for the fifth (or thereabouts, I don’t often count when kissing), we heard a noise in the house. It could have been a chair pulled back for a better look at what was outside. Or a harumph – the clearing of a human throat – to indicate the undetected presence of an onlooker. We jumped, casting around to ascertain who or what it could’ve been. ‘Can you hear a goat?’ my new husband hazarded, proving himself not very well acquainted with goats. I, on the other hand, had grown up in a part of Kolkata overrun with goats, and knew a cloven hooved critter when I heard one. ‘Human, I think,’ I whispered to him, as we made for our car. We had largesse in the back, in the form of mouth-watering food with which we did not intend to part. Nor did we want to be arrested for trespassing, or for our spate of kisses. Scrambling into the car, we were sure it felt more crowded than when we drove in, yet thought nothing further of it.

Suddenly our own villa was quiet no longer. We heard the tread of unfamiliar footsteps in the empty kitchen. The splash of water when no one was in the pool. Whispers in the garden that weren’t leaves in the breeze. And on one occasion, another of those harumphs we’d heard at the apparently abandoned villa. 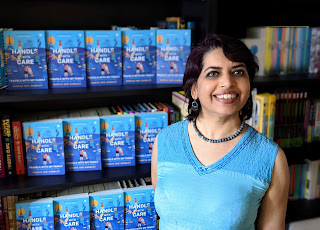 Posted by Creative Writing at Leicester at 06:19