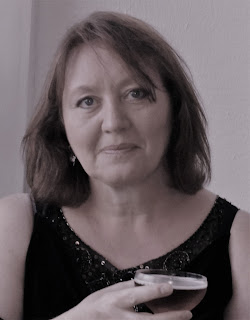 Judi Sutherland was born in Stoke-on-Trent to Geordie parents, spent some time as a child in Northern Ireland, and since then has lived all over England from Sussex to Durham, as paid employment has dictated. She trained in Microbiology and Biochemistry at the Universities of Leeds and Nottingham respectively then pursued a career in the pharmaceutical and biotechnology industries, developing new medicines.

Judi obtained her MA in Creative Writing in 2012 at Royal Holloway, University of London, where she was awarded the Margaret Hewson Prize. Her poetry is mainly concerned with place, identity and belonging, and she has an interest in landscape and history. Following Teisa was written between 2014 and 2020, when she was living in Barnard Castle, County Durham. Her poems are widely published in magazines such as Oxford Poetry, Prole, The North, New Statesman, and online. She blogs at judisutherland.com. Her first pamphlet The Ship Owner’s House was published by Vane Women Press in 2018.

She is currently living in Malahide, North County Dublin, Ireland, with her husband and two rescue cats, where she is writing poems about her new surroundings – Fingal – the Land of the Fair Strangers. 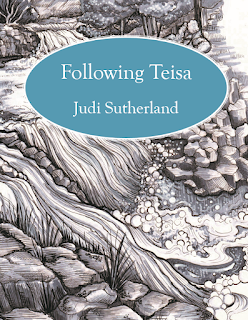 Nobody seems to know much about Anne Wilson, who, in 1778, self-published a 1600-line poem tracing the Tees from source to mouth (see here). The title, Teisa, is allegedly the Celtic name for the River Tees, or of its genius loci, a water goddess. The poem was written, unsurprisingly for its time, in heroic couplets, with many classical allusions, appeals to the muses, and a long, rambling Arthurian story that intrudes at Rokeby Park.

Judi moved to Teesdale in 2014 and felt dreadfully homesick for her previous village near the Thames. She started walking by the Tees as a way of getting to know and love her new environment and decided to repeat Anne Wilson’s poetic journey for a different generation.

Her strategy for this work was to walk most of the Teesdale Way from the Pennines to the North Sea, as well as to research as much as she could about the towns and villages on both banks of the river. She remains convinced that the contrast between the upper and lower reaches of the Tees is much greater than anything a southern river can offer.

From Following Teisa, by Judi Sutherland

Middleton in Teesdale to Kirkcarrion

Middleton, a place, Anne Wilson tells,
of people neither splendid, rich nor poor
where Hudeshope Beck pours from the fell
to meet the river here, beside the livestock mart
where Swaledale ewes and gimmer lambs,
mules and rams are penned for sale; thick-coated,
curly horned, speckle-legged and bold.
Under the arch on Masterman Place
is a Newtown of neat and convenient cottages -
the chaste and appropriate design of Mr. Bonomi;
a village heavy with lead and temperance
for the most deserving workmen
of the London Lead Company,
whose Quaker sensibilities
abhorred the scourge of alcohol. Instead
let the miners take their toxic chances
hewing blue-grey bouse from the adit
with pick and hammer, plug and feather
crowbar and candle.

Above the town, a stand of pines on a barrow,
Bronze Age elders whose watchful eyes
follow. Turn around, you’ll swear they’ve shifted
in their rootball, their wooden footfall
silent on the hill. In comes the Lune
from its lonely dale, escaping the broad dams
of Selset and Grassholme.
Posted by Creative Writing at Leicester at 02:26