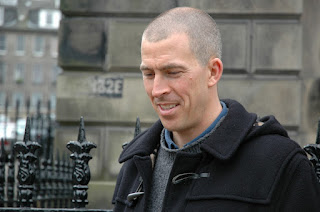 Thomas Legendre’s previous work includes The Burning (a novel), Half Life (a play produced by NVA and the National Theatre of Scotland), and Dream Repair (a radio drama aired by BBC Radio 4). He is an Assistant Professor at the University of Nottingham. 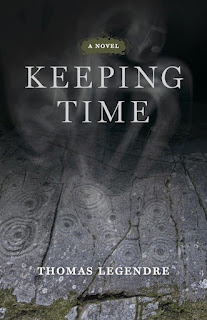 About Keeping Time, by Thomas Legendre

A crumbling marriage. An ancient mystery. And a way to change the past ... When archaeologist Aaron Keeler finds himself transported eighteen years backward in time, he becomes swept up in a strangely illicit liaison with his younger wife. A brilliant musician, Violet is captivated by the attentive, “weathered” version of her husband. The Aaron she recently married has become distant, absorbed by his excavation of a prehistoric site at Kilmartin Glen on Scotland’s west coast, where he will soon make the discovery that launches his career. As Aaron travels back and forth across the span of nearly two decades, with time passing in both worlds, he faces a threat to his revelatory dig, a crisis with the older Violet - mother of his two young children - and a sudden deterioration of his health. Meanwhile, Violet’s musical performances take on a resonance related to the secrets the two are uncovering in both time frames. With their children and Aaron’s lives at risk, he and Violet try to repair the damage before it’s too late.

You can watch a trailer for Keeping Time here.

Below, you can read a short excerpt from the novel.

From Keeping Time, by Thomas Legendre

If I make a circle it doesn’t matter where I start, so let’s begin with Aaron appearing from the future. How does a time traveller arrive? By buzzing the entryphone. It halts me during Bach’s Passacaglia in C minor for Organ - or rather, a piano transcription that seems too thin, too sterile - and I rise from the bench humming the final variation, trying to give it some life. I lose it completely, though, at the sound of Aaron’s voice bristling with static. This can’t be good news. He’s supposed to be in Mid Argyll. As his footsteps come up the main stair I think maybe the next phase of his Great Dig was postponed and he lost his keys in a Neolithic ditch. But then the sight of him sends me backing into the sitting room. He recites my favourite colour, my lucky number, my comfort foods, my shoe and dress sizes - as if I need convincing, when in fact the problem isn’t that I doubt who he is, but that I immediately believe it. Yes, it’s obvious. My future is his past. Although it’s April of 1988 for me, it’s November of 2006 for him - or almost November. Halloween Night. That’s when our son will stay home with me, apparently, while he takes our daughter trick-or-treating despite my protests so he can introduce her to his American childhood ritual, his annual allowance of junk food and fright. I can’t imagine myself protesting such a harmless thing, which is partly why it seems like a different woman in that time. An alternate self. The mother of two children. I’m already suspicious of her. Where does she begin? Where do I end? But I’m getting ahead of myself. I’m here. I’m now. I’m making it up as I go along. If I make a circle it doesn’t matter where I start.

“But you need to know it’s really me,” he says. “And I can prove it. The first time we met was at that pub off Buccleuch. You were upset about playing the Rach 3 and I told you ...” He stops himself, clenching his eyes shut. “No, no. Wait. Anyone could know that.”

He turns away and grips the mantle, in the throes of some internal debate, then turns back and starts reeling off details about something that happened to me before that - a private trauma I’ve never shared with anyone. Proof. Evidence. He needs to convince himself that I’m convinced. He needs to believe that I believe.

“But you locked the door behind him,” he says, carrying on, “and you sat there hugging your knees until dawn when you could walk home safely and you couldn’t even bring yourself to tell Clare or Isobel afterward, instead making up some story about, what was it, he vomited and passed out. It was your first and last one-night stand. Am I right?”

His face is both familiar and strange. There’s a wider spread to his features, the continental drift of age, but otherwise he seems recast with sharper angles and ridges, with deeper definition. The endearing little curve to his lower lip is more pronounced, his hairline reduced to a close-cropped style that actually suits him better. It’s the haircut he should have had from the beginning. I hesitate to mention it because I’m afraid he’s going to say it was my suggestion. The other Violet. The older one. A deep unease comes over me, unreasonably, at the thought of her.

“Violet, please. Am I right about this?”

I manage to nod.

“Have you shared that experience with anyone?”

I manage to shake my head.

I close my eyes to absorb not the fact but the feeling of it. A new time signature.

“I know it must be strange to have me describe it this way ... like watching your own dream on television. But you’ll tell me in a few years. At a performance one night you’ll see someone who resembles him and you’ll confess the whole thing afterward right here in this room. Except it’s not really a confession because you didn’t do anything wrong. I should mention that now, ahead of time, to preempt some of the guilt. Because the guy tried to rape you, for Christ’s sake, so don’t be ashamed of that and I still want to track him down and break his kneecaps, which you’ll attribute to my crude notion of Appalachian justice. If memory serves.”

And his accent has changed. Those hints of southern comfort, those drawling vowels - all tempered to British speech. The sound of him, the sense. Yes, it’s the man he will be in eighteen years. One of my legs is trembling like a bow string and I have to collar it with both hands to make it stop.

He comes forward. “Are you all right?”

I step back and knock into a lamp. He lunges and catches it before it falls, and then looks at it oddly as he sets it back.

“Tessa broke this. She was crawling under the table and -” He glances at an empty corner of the room. “The table we’re going to buy after we have the flat repainted. In 1996, I think.”

“Good thing you caught it, then.”

His attention snaps back to me, flummoxed by the comment until it takes hold and he laughs. He nods for a moment. Then his eyes widen with mischief. “Hey, should I smash it and see what happens?”

Posted by Creative Writing at Leicester at 03:45