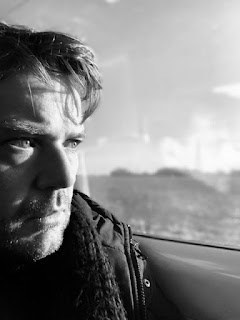 Ashley Stokes is originally from Carshalton in Surrey and studied first Modern History at the University of Oxford and then Creative Writing at the University of East Anglia. He is author of The Syllabus of Errors (Unthank Books, 2013) and Voice (TLC Press, 2019), and editor of the Unthology series and The End: Fifteen Endings to Fifteen Paintings (Unthank Books, 2016). His recent short fiction includes 'Subtemple' in Black Static; 'Hardrada' in Tales from the Shadow Booth, Vol 4, edited by Dan Coxon; 'Evergreen' in BFS Horizons 11; 'Two Drifters' in Unsung Stories Online, and 'Black Lab' in Storgy. Other stories have appeared in Bare Fiction, The Lonely Crowd, the Warwick Review and more. He lives in the East of England where he’s a ghostwriter and ghost. His new novel, Gigantic, is published by Unsung Stories. 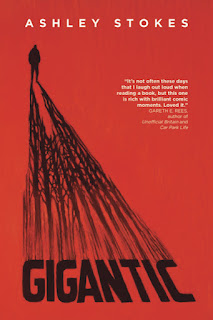 About Gigantic, by Ashley Stokes

Kevin Stubbs is a Knower. He knows life hasn’t always treated him fairly. He knows he wants to be allowed access to his son again. But most of all, he knows that the London Borough of Sutton is being stalked by a nine-foot-tall, red-eyed, hairy relict hominid – the North Surrey Gigantopithecus.

Armed with a thermal imaging camera (aka the Heat Ray) and a Trifield 100XE electromagnetic field reader (aka the Tractor Beam), Kevin and his trusty comrades in the GIT (aka the Gigantopithecus Intelligence Team) set out to investigate a new sighting on the outskirts of Sutton. If real, it will finally prove to the world that the infamous Gartree-Hogg footage was genuine, and a British Bigfoot is living in suburban London: FACT.

But what he discovers undermines everything he believes in – and forces Kevin to face up to his own failures, and the very real, very scary prospect that he might have got it all terribly wrong.

You can see more details about Gigantic on the publisher's website here. Below, you can read an extract from the novel.

There had been a time when my boy believed in this thing of mine. When he was born, because I’d made a solemn promise to Boho, I gave up the GIT, the expeditions, the camping, the staying up all night, the weekly team discussion evenings in The Churn. Before he was born was one of the best periods of my life. Not only had I pulled for once, but these were also what I called the GIT Supreme days of the classic line-up (Me, Kevin Stubbs, aka Agent MonkeyMagic; Edward ‘Eddie’ Gartree, aka Gorgo, The Man Who Started It All; and Derek Funnel, aka The Funnel). When I got married I left them to it. They became what I called Continuity GIT. I had every intention of leaving it alone, of being a proper dad and a husband and all that, now that I had a kid and my wife’s English was good enough for us to actually have a conversation that wasn’t like a game of charades or moving ships about using semaphore. I am not saying I didn’t hanker. I’m not saying I forgot. I’m not saying I didn’t feel forlorn and wistful when I smelled crisp autumn air or pine needles.

When he was old enough, I formed a little GIT fun team. It was perhaps my favourite of all the teams. It was like GIT Cubs, just my boy and me.

On Saturday evenings we would drive out into the woods, a cool-box added to the usual kit, and sit up all night in the van: Oaks Park, Chaldon trig point, Reigate Hill, Box Hill, Raynes Park, all the hotspots. I’d explain The Lore, passing it down from father to son. There would be tea in a flask and sandwiches I’d cut up nice and small, and a Wagon Wheel each.

These were the perfect moments for me. Not all I’d ever wanted, but something nearly as good as seeing a gigantopithecus rampant. Nearly as good as seeing a gigantopithecus was the first time I saw Kyrylo wrapped up in a white blanket and cradled in Boho’s arms, her sitting up in the hospital bed and her smile then. That first time he gripped my thumb with his little fist. The look of joy on his face when he puffed out all four candles on his birthday cake at once and the three of us all blew the lingering smoke away and collapsed into laughing. When we took the stabilisers off the bike and he rode away from me for the first time without falling over. I wanted us to build on these memories in the woods, on stake-out operations in the van. I wanted him to have childhood memories of me that I did not have with my old man. We would watch out for it together, and in doing so we would be together forever.

I thought he liked it. I would have liked it, when I was his age. My mum didn’t even let me go outside on my own. And she only encouraged me to keep my mind closed by making me read about Jesus over and over again as if he were a real person who could spring out from behind the curtains at any time. I didn’t have an old man to take me out in the woods and into the Great Spaces. While we were out in the van, just me and my boy, gigantopithecus spotting, I often thought that if I’d known my dad he would have taken me out like this. He would have shown me how to read shadows and scat, how to do a wood knock and a ’squatch call, things I’d had to learn from Gorgo. My dad, who I sometimes thought of as Arthur C. Dad, would have passed down The Lore to me, so when I’d seen the Gartree-Hogg footage for the first time I would have been properly prepared and not so shat up. I wished Arthur C. Dad had taken me out into the woods to show me the grand and noble ones. Instead, at weekends, I’d often found myself sitting in some side-room with The Watchtower or The Silver Chair while Mum was in a Bible study group in some Kingdom Hall somewhere in Sutton or south London or Surrey. Occasionally, this was made even more boring by having to sit in some weirdo’s house with the shy, frakked-up kids of other Witnesses while Mum and their parents talked about whatever they hated the most that week: vaccines, voting, VD, whatever. I didn’t want any of that cold empty bollocks for my boy. I wanted him to live, to Know. What I didn’t want was for him to ever find himself in some conservatory in New Malden with an eight-year-old girl called Ruth whose idea of play was to ask, ‘Kevin, have you considered your relationship with the risen Christ?’ Arthur C. Dad wouldn’t have let that happen to me. I wasn’t going to let that happen to my boy.

His eighth birthday was on a Saturday. He was born in June, so it was warm, summer, a great time for his old man to take him out squatching. That night we were parked up on Chipstead Downs, but no sooner had we arrived he drifted off in the passenger seat. I was drawing a blanket around him when I heard something outside. Truth be told, I didn’t hear it. I sensed it vibrate through nature, quiver in the night air. My boy was asleep. Zonked out. Dead to the world. I put on my night-vision goggles and slid out into the darkness. I could definitely hear its Darth-Vader-like breathing. I could smell its horrible smell, too.

You’re not supposed to see it. It’s not supposed to exist. It can scare the bollocks off you. Just look what happened to Jackie Hogg, one of the Original Knowers. In the early days of GIT, pre the arrival on the scene of the young believer Kevin Stubbs, Jackie had seen Giganto so often that his nerves unravelled. It was like he’d been playing a horror-based role-playing game where the characters have a sanity score. I’d played one of these on a rainy Sunday afternoon round Derek Funnel’s flat on the Poet’s Estate with some of his UFO nutter mates from Caterham. It was like Jackie had actually been living in one of these games. Every time he’d seen Giganto, he’d rolled a twenty-sided die and whatever number came up had been deducted from his mind. I’m not like that. I am solid.

I had my back to the van and Giganto was in the trees. I could hear him. I could certainly smell him. I could smell, too, that he was moving off. Also, his breathing was not as loud as it had been. Using my ninja stealth skills, and with camera at the ready, I followed. I didn’t intend to be gone long, only a few minutes, tops.

All the time it was ahead of me, an outline in the trees, crisscrossed by fronds: a brown giant, more shadow than man. As the sun came up, just for a second, as I scrambled towards it, I knew that I had it, that it was here in the forests, something that would one day hold out an understanding hand, that would help me be a man of his world, a citizen of eternal nature. But it vanished, and I was left standing with nothing but the woods and the feeling that one day soon we would see each other again.

Boho was right that I was a frakker not to think ahead. That our boy might well wake up in the van, in the dark, on his own in an isolated spot I’d convinced him was like a prehistoric glade where ten-foot-tall ape-bipeds with cone-shaped heads still roamed and roared, that could shred a deer to pieces and, it was theorised, were attracted by the smell of Wagon Wheels (see Report #181: The Stalker of the Wilderness).

The thing is, when you’re a kid, adventure is all in the mind. It’s not real. It all happens under controlled circumstances: supervision, teachers, mind control, thought police. This just isn’t so when you’re a grown man, a Knower. I tried to tell myself and Boho that that was what I was trying to communicate to him, that in my own way I was trying to show him the real world.

Anyway, she didn’t want to hear any of that. That was the end of us, me and her. She demanded that I stop going out looking for Giganto, and when I didn’t say ‘of course’ straightaway I was out of the house. I was sleeping in my van. I was not allowed back until I admitted it wasn’t real. But it was real, I’d seen it loads of times.

Posted by Creative Writing at Leicester at 05:04