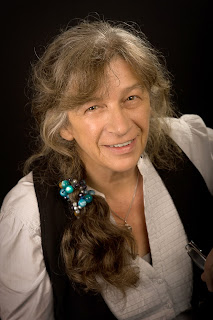 Angela France has had poems published in many leading journals and has been anthologised a number of times. Her publications include Occupation (Ragged Raven Press, 2009), Lessons in Mallemaroking (Nine Arches Press, 2011), Hide (Nine Arches Press 2013) and The Hill (Nine Arches Press 2017). The Hill was developed into a live multi-media poetry show which Angela toured, funded by Arts Council England. Her latest collection, Terminarchy, was published by Nine Arches Press in July 2021 and launched at Ledbury Poetry Festival. She has an M.A. in Creative and Critical Writing and a PhD from the University of Gloucestershire. Angela teaches Creative Writing at the University of Gloucestershire and in various community settings. 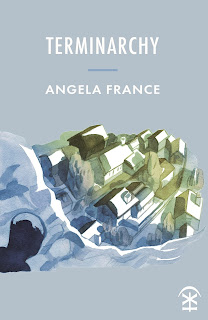 About Terminarchy, by Angela France

Angela France’s distinctive new collection of poems, Terminarchy, eloquently considers the troubling terms of existence in an age of climate catastrophe and technological change. How do we negotiate a world where capitalism and greed threaten a fragile earth, where technology seems to promise us connection but might also fuel isolation? Where even finding solace in nature reminds us that the seasons can no longer be trusted? How is human urge and want hastening us towards our own ‘endling’ – and what might it mean to be the ‘last’?

In reframing ecopoetics in her own instinctive, radical, lyrical form, France juxtaposes the accelerated, all-consuming speed of contemporary and future times with the ‘longtime’ and ancient, and considers whether, rather than collison-course, there might be a better way to coexist. Where extinction threatens, these wry, alert poems and their eloquent, earthy voices try to find a way through and look for hope.

You can read more about Terminarchy on the publisher's website here. Below, you can read three poems from the collection.

drift over the earth, gather
in loose clusters, their calls echo
then cease.
Predators don’t notice prey, run together,
scan and scent the ground on hill and heath
in widening circles until they tire and lie down
alone.
The Thylacine doesn’t try; he’s released
the need and drive, has given up and found
a place to lie still as he blurs and fades
to become just a shadow
on the ground.
On a branch above,
the passenger pigeon waits;
her claws no longer able to uncurl,
tree-bark patterning feathers as if braided
in mist. Moths and butterflies whirl
between leaves; don’t settle or rest,
ignored by the birds. The Laughing Owl,
the Forest Thrush, circle the sky
possessed
by an undeniable need and scarred
by hope, until exhaustion brings peace
in death.

A Barbary Lion calls in the hills unmarked
and Sparrow weeps for the want of an ark.
Small Gods

Our gods are poor things, these days,
insubstantial, weak in sinew and bone,
worshipped through clicks and clichés
and starved though we try to atone
through getting and losing, the sacrifice
of things we don’t need. We’ve grown
past thunder and threat, gods in disguise
to walk among us as man or bull; strength
only known or used as a way to victimise
different thoughts or ways to enhance
helpless lives. We’ve lost Thor’s hammer
Apollo’s bow and Odin’s mead, take offence
at any prick to our comfort while we clamour
on keyboards for anything to fill the holes
they’ve left.  We may edit a page’s banner
to signal who we are but try to control
anything real, of blood and flesh,
by pinning to screens where we can scroll
past whatever disturbs.  Copy, paste, refresh,
we are a worn people whose shrivelled gods
are enshrined in phone lenses as we try to possess
any thing to salve a communal sense of loss.

Down Piggy Lane
The path skulks round the back end of a housing estate,
hidden by overgrown shrubs and tattered trees
either side of the sullen brook. Scraps and patches
of land line the trail, one-proud fences sagging between.
Pig arks are empty, fading grass straggling
up the sides. Competing cockerels shout
from pens, hidden by a clutter of buckets,
upturned feed tubs and a green-scummed bath.

Every patch has a shed or shelter, all alike
in their difference. Walls patched
with multi-coloured iron, rust collecting
in the corrugations. Here an old front door
with a fanlight and ghost of a number,
there the lichened side of a caravan.
My foot catches in the muddy ruts and humps
of the path and I stumble into a memory
of dreaming through afternoon school,
waiting for when nine-year-old legs could pump
the bike pedals, carrying a Tupperware beaker
of milk for feral kittens and windfall apples
stuffed under my jumper for a shaggy piebald pony.

How have I forgotten all I wanted then?
To own one of those fields, to live
in a ramshackle shed with the kittens
and the pony’s head looking through
feed-sack curtains, a few large dogs,
a nest of slow worms under the floor
and any other creature who found me.
How once such things were enough.
Posted by Creative Writing at Leicester at 01:34