The G. S. Fraser Prize is an annual poetry competition for students at the University of Leicester. This year's winner was Jane Simmons, and Colin Gardiner received an honourable mention. You can read their poems below. 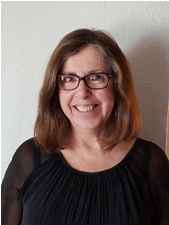 Jane Simmons is a former teacher/lecturer who has recently completed an MA in Creative Writing at the University of Lincoln. She is now a PhD student at the university of Leicester, where her research project is The Poetics and Politics of Motherhood, a practice-led exploration of motherhood through an environmental and political lens, engaging with the theme creatively and as it is treated in contemporary women’s poetry. As a reviewer for The Blue Nib literary magazine, Jane has built a significant publication history of writing about contemporary women’s poetry. A small selection of her own poems appeared in the March 2019 edition of the magazine. Her collection From Darkness into Light – poems inspired by the Book of Kells – was published in 2018. Further poems will appear in two anthologies to be published by Pimento Press, also in 2019: The View from the Steep, and Seasonal Poems from Pimento Poets. Jane regularly reads/performs her work in the Lincoln area.

In that hard winter to end all winters,
small birds fell frozen from an Arctic sky.
My mother fitted bolts to all the doors
against the thieves who would come in the night,
stood astride the claw-footed bath, pouring
scalding water down the swollen, ice-bound pipes,
while her bitter tears fell, jittered, skittered
like hailstones across the bathroom lino
to ricochet off the peeling skirting-boards.
I scrabbled after them, strung them on a necklace,
worried at them through the wide-awake nights
when a witch’s wind wailed in the chimney
and the big, bad wolf howled outside our door.

Mothers of the living, mothers of the dead,
mothers of sons tried at county assizes,
poor widows bought cloaks from parish funds,
all trudging from hardship to hardship, 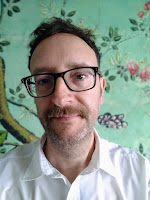 Colin Gardiner is currently studying an MA in creative writing at the University of Leicester. He is originally from Birmingham and now lives in Coventry.

Treacle traffic blocks my arterial streets.
Slap of church-bell heart attack thunders
Through the pale snooze of the cemetery.
A soundtrack to my Monday high-street blues.

Flash cut to wild-haired earth mother, reeking
Of essential oils. With a wide-eyed child
In hand. Running from a Co-op spillage.
Calamity Jane denies any damage.

Lavender dusk falls. I wear my shroud of
Sodium. My myopic yellow lights
Flicker and strobe in the wake of rush hour.
Chip-shop breeze in greasy hair of tired trees.

Late-night edit of leopard skins and white
Shirts, who colonise safe spaces in a
Conga-line stagger. Not like Jagger. A
Smithereen carpet for Uber hangovers.

I walked from the car. I was fly-tipping
the contents of my head onto the
towpath. I followed the incantation
of traffic from the flyover.
The dissonant notes and drifting motes were
commas, suspended in the heat-haze.
A languorous puzzle. I joined the dots
for a while.

As I walked beside the stillness, I traced
a liquorice line that trickled through
the veins of the city.
I came upon a minor hex,
a prickling cloud of midges, seething in
the prism of shattered rear-view mirrors.

The manspread of pylons played snakes
and ladders with the long grass,
their power-stance loomed over scrapyards.
I followed a winding ley-line, that led
me through skeletons of warehouses,
the occult pulse of power stations,
and rows of drunken locks.

A clearing in the bushes revealed an
aviary of cans and bottles.
Sunken treasure. A meth nest, best left
alone.
Then suddenly a sodden pirate
staggered into view. With laminated
eyes, he was screaming at the sky,
‘They're frying up the sea life centre.’

I slipped away through weeds yielding to the
mid-day breeze. Secret machines were sleeping
by the disused railway track, deluded
in their dreams of reactivation.

I paused by the paper-mill. A pair of
geese eyed me warily. They were guarding
their little pool. They were celebrating
their union in oil-slicked water.
I held up my camera. Their hissed curses
chased me through the mire.

I stumbled through the bramble and the shade.
Before me stood a signal box,
pebbledashed with pigeon shit.
Humming with mysterious potential.
A transmission down a copper wire.
A broadcast to the wildflowers growing
in lacunas of corroded coil sprigs.

I heard the music in the echoes of
the basin. A phantom wall of noise
caressing curving concrete. Spaghetti
intertwined. The tunnel whispered:
‘Have I seen you here before?’

Posted by Creative Writing at Leicester at 04:13