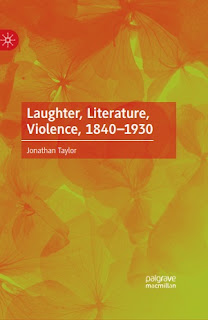 Violence is of the essence of laughter.

I've recently had an academic book published by Palgrave-Macmillan, called Laughter, Literature, Violence, 1840-1930. The idea for the book originally grew out of my own creative work: as others have pointed out, my writing style is often marked by a dark humour, even grotesque comedy. Initially, I was hardly conscious of this: the mixture of comedy and tragedy in my memoir, Take Me Home (2007), arose naturally, almost unawares, because they were intertwined in reality - in elements of my father's illness, and our experience of caring for him. It seems to me that in so-called 'reality' (whatever that is), comedy and tragedy are rarely monolithic. People laugh at funerals, cry at parties. Death, tragedy, horror, violence can be funny - or horrifically funny. That's why so many literary memoirs mingle laughter and tears, even when they're ostensibly concerned with the most serious, or distressing of subjects. I wanted to write reflectively about this strange emotional hybridity, particularly in relation to memoirs and short fiction - and, in that sense, the academic book makes conscious what I've been doing, over many years, in my own creative writing. It does so, for the most part, in a displaced form, in relation to literary texts by other memoirists and short-story writers; but, as Oscar Wilde famously claimed, all criticism is a kind of autobiography. In writing the book, I have learned a huge amount about the historical periods, about theories of laughter, about the writers - and also about myself, my own style, and my (sometimes dark) sense of humour. Here's the book's blurb:

Laughter, Literature, Violence, 1840-1930 investigates the strange, complex, even paradoxical relationship between laughter, on the one hand, and violence, war, horror, death, on the other. It does so in relation to philosophy, politics, and key nineteenth- and twentieth-century literary texts, by Edgar Allan Poe, Edmund Gosse, Wyndham Lewis and Katherine Mansfield – texts which explore the far reaches of Schadenfreude, and so-called ‘superiority theories’ of laughter, pushing these theories to breaking point. In these literary texts, the violent superiority often ascribed to laughter is seen as radically unstable, co-existing with its opposite: an anarchic sense of equality. Laughter, humour and comedy are slippery, duplicitous, ambivalent, self-contradictory hybrids, fusing apparently discordant elements. Now and then, though, literary and philosophical texts also dream of a different kind of laughter, one which reaches beyond its alloys – a transcendent, ‘perfect’ laughter which exists only in and for itself. 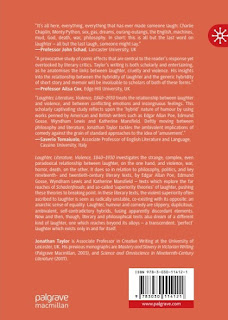 Posted by Creative Writing at Leicester at 07:45