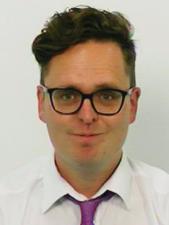 Gareth Watts is Head of Creative Arts at Gateway College. He has written for radio, published poetry, written short stories and reviews for Fiction Uncovered. He writes for Leftlion and has a regular football column for Forza Garibaldi. His first novel Werner Krauss (Sussex Academic) was published in 2017.

The novel is a fictional account of the life of German film and theatre actor Werner Krauss,  star of the classic silent film The Cabinet of Doctor Caligari. Upon gaining worldwide recognition in this film, Krauss was co-opted into the Nazi hate campaign of the 1930s and 1940s. He featured in the vicious propaganda film Jud Suss, and he was complicit in giving anti-Semitic performances onstage, most notably as Shylock in Shakespeare's The Merchant of Venice. The novel focuses on three distinct eras in Krauss's life: the struggling, exuberant actor of the 1920s; the philandering pragmatist of the 1930s; and the elderly, neurotic outcast of the 1940s. Despite his honourable intentions, Krauss was all-too-often undermined by his inability to say 'no' to women, alcohol and the egregious Joseph Goebbels. In this fictional re-imagining of his life, Krauss's motives and decisions are explored in an attempt to discover why he collaborated with the Nazis in the way that he did, as well as demonstrating the personal and political consequences of his actions. Krauss's story is part of the wider story of the role of the arts and media in Nazi Germany. Extensively researched, including contemporary news stories, archived film material, critical essays on Krauss and translated passages from his autobiography, Das Schauspiel Meines Lebens, this fictional reconstruction of Krauss's life and career is preceded by a substantive Introduction by the author, setting the novel in the context of the genre of Holocaust fiction, emulating and reminiscent of Christopher Isherwood's Goodbye to Berlin and Thomas Keneally's Schindler's Ark. 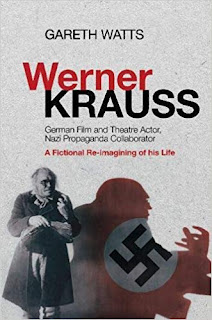 Extract from the novel, Werner Krauss

But how to communicate with the future?

Lifting the collar of his overcoat, Werner Krauss ducked his head and walked quickly. Each step seemed to mimic the pace of his heart. Why was he doing this? He was a free man, after all.

On waking that morning, he’d ambled into the kitchen of his Stuttgart residence and taken a bottle of Asbach Uralt from the cupboard. Grabbing a dirty wine glass from the draining-board, he poured carelessly, overflowing the stemmed glass. Preparing himself for a shock, he gulped it down. Tears rolled from his eyes, but he resisted the urge to vomit. He took a cigarette from the box which had been to bed with him, and, with an unsteady hand, placed it in his mouth. Sinking to his knees, he lit it using the gas flame of the oven hob, which had been burning all night. He stole an hour of sleep, there on the kitchen floor, with the cigarette butt still in his mouth. Waking with a start, he dressed thoughtlessly, and, realising he was too late to arrange a ride, headed for the court on foot.

For months he had been preparing for this day – memorising anecdotes about a compassionate, sensitive man. But these monologues now seemed to be slipping away, and all he could think of was his sore ankle.

As the State Court building came into view, so too did the sizeable and angry crowd.

The noise grew, and individual insults rang out.

That last one echoed in his ear. His cheeks burned. As the crowd got closer, Werner noticed there was no sign of the special security that he had requested. His name obviously didn’t carry the same weight in Stuttgart as it had before. He swallowed hard, and started to run, or rather, limp, at the crowd, head-on. He fought his way through, almost reaching the court door, and relative safety. Then, a placard bearing the words NAZI COWARD crashed down on his forehead. He fell to the ground amid kicks, punches and insults.

Sat now in the corridor outside the courtroom, he gazed at a grey wall for some time, trying to piece together the speech in his mind, and forget the morning’s unexpected nightmare. He reached into his jacket for a notebook and pen. Wanting to commit words to the page, he would remind himself of his humanity:

Somewhere, there is salvation. A place to feel alive even when they line the streets, calling for your death …

Werner knew he was exaggerating, but for a moment at least he enjoyed the melodrama and continued to dwell on the ‘tragedy’ of his situation:

… I am not a murderer and yet they try me like one. They want me dead as an example to all. In the pages of the pauper-press I am demonised for doing my duty, performing my tasks, being true and being artistic. Hath a Jew not eyes?

He smiled as he scrawled that last question mark. For a moment he considered incorporating these notes in his memoirs. ‘It could be included in the prologue,’ he thought.

He tore the page from his notebook and put it into his pocket. He must be careful not to allow his sense of humour to be used against him. Fear started to grip the face of the man who had worn so  many masks. Being nervous was natural though, he decided, and the court must not suspect a performance – they must see a human - a man, not an actor. He should talk only of circumstance, of coincidence. He could talk about Maria. He could talk about his son.

With those thoughts in mind, Werner was led into the courtroom and asked to confirm his name. The presiding officer was a young, slither of a man who hid behind a pair of spectacles. This infuriated Werner. ‘Where were you in the Weimar years?’ he wanted to shout. He fantasised about smashing this man’s spectacles into his face, using a nearby chair. At least then, he thought, he could have a reason for remorse, a reason to be tried.

Werner let out a quiet, though not inaudible, belch. The brandy was rising from his stomach and he felt sick. But he could not leave the courtroom and attract more attention. He swallowed hard, and tried to concentrate on the question the presiding officer had begun to ask: 'Herr Krauss, how would you define your role in Hitler’s Reich?'

Posted by Creative Writing at Leicester at 08:55