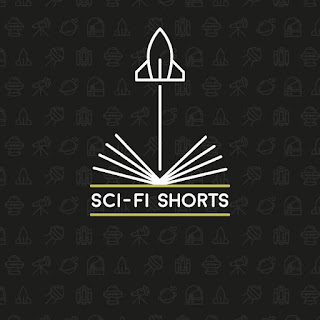 Over the last few months, the Centre for New Writing, Literary Leicester Festival and the National Space Centre have together been running a Creative Writing competition called "Sci-Fi Shorts." Entrants were invited to write science-fiction short stories on a space theme. There were two categories, one for writers 15 and under, one for writers 16+.

The winners have now been announced, and the awards ceremony took place at the Space Centre as part of Literary Leicester Festival on Saturday, along with talks by eminent science-fiction authors Philip Reeve and Alastair Reynolds.

The judging panel included representatives from the National Space Centre and the Centre for New Writing at the University of Leicester. I was one of them. The competition was hugely enjoyable to judge, and there were many strong entries to choose from - despite the difficulty of the challenge. As someone whose first published stories were science fiction, I often think science fiction is one of the hardest of all genres to write in. You have to juggle so many different elements in a successful science fiction story: stylish writing, characterisation, convincing scientific details, so-called "world building," and the demands of narrative - of telling a good story.  I moved away from writing science fiction many years ago - though I've always thought I might eventually return to it, and I still read widely in the form - to write in a more "realist" (or magical-realist) vein. I can't help feeling that realism is easier in some ways: you don't have to manage the science in the same way, and your world is ready-built for you. To manage these things whilst telling a good and emotional story is the great challenge of science fiction; and the winning entries for this competition did so brilliantly, almost effortlessly, in ways I very much admire.

You can read the prize-winning entries via the links below:

Age 15 and below:
Winner: 'In Armstrong’s Footsteps' by Ashley Tan Mei-Lynn
Runner-up: 'Lost In Space' by Giles Carey

Honourable Mentions:
‘What is it, Leavine?’ by Adair Cole 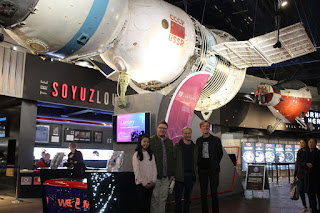 Some of the winners with Philip Reeve at the Space Centre
Posted by Creative Writing at Leicester at 07:51