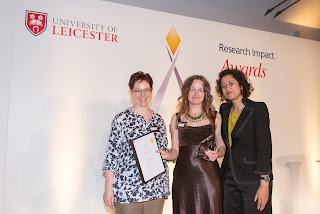 The Centre for New Writing (CNW) has been awarded Best Cultural Impact for its work on literary development. The CNW was established in 2013 as a practical response to the research findings of its founders, particularly in relation to the exclusion of British Black and Asian writers. The aim was to diversify literary voices beyond the metropolitan mainstream.

The CNW subsequently raised regional writers’ professional profiles through a series of funded projects: ‘Grassroutes’ (Arts Council), ‘Sole2Soul’ (about Harborough Museum’s shoe exhibit) and ‘Affective Digital Histories' (AHRC, http://affectivedigitalhistories.org.uk/). Our research identified creative commissions as a key support mechanism for promoting  writers outside London. Accordingly, the CNW has commissioned 74 pieces of writing since 2013. Among these are 6 major commissions for the Affective Digital Histories project, performed at The Phoenix, soon afterwards published as a book and accompanying smartphone app called Hidden Stories (2015). Two CNW commissions have won literary awards and another CNW-commissioned work is being made into a film. A further CNW commission is the subject of an article (authored by Corinne Fowler) in The Cambridge Companion to Black British Writing (2016) of which the writer SuAndi states ‘with steadfast determination, champions of the Black British voice … have stepped forward [to] recognise the value of our literature across all genres’.

A central CNW strategy has been to tap into infrastructural support for regional writers by using creative writing to enhance non-Arts research. As the managing director of the spoken word organisation Tilt observes, the Writing and Research initiative ‘makes a case for literature …This is something to be admired (and sustained).’ Some key collaborations include: ‘Women’s Writing in the Midlands’ (using creative writing to raise awareness of 18th women activists) and ‘Life Cycles’ (a commission to help the Diabetes Research Centre combat sedentary behaviour). A further CNW commission, ‘Artificial Intelligence,’ promotes the public benefits of new technologies. The CNW also commissioned a writer to produce a script for a short film, presented by Brett Matulis from Geography, to influence policy-making at the World Conservation Congress, a global environmental forum. In a 2015 survey of the region’s literary scene by The Asian Writer, anonymous respondents said of the CNW: ‘The Centre for New Writing is … leading the country and perhaps the world in its field, presenting a tremendous variety of literary events with an enormous scope and revolutionary discourse.’ Another respondent said: ‘Leicester is practically undergoing a renaissance! It has been galvanised by the Centre for New Writing ... as the centre has supported writers and the overall literary scene both page and stage’”. The free Literary Leicester Festival has been central to this strategy.

The CNW wishes to thank Leicester's literary community, and all its partners, for their consistently brilliant and constructive input. 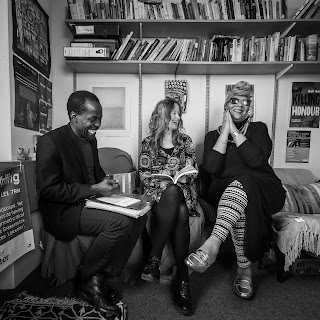 Photos courtesy of Osborne Hollis Photography﻿
Posted by Creative Writing at Leicester at 06:49